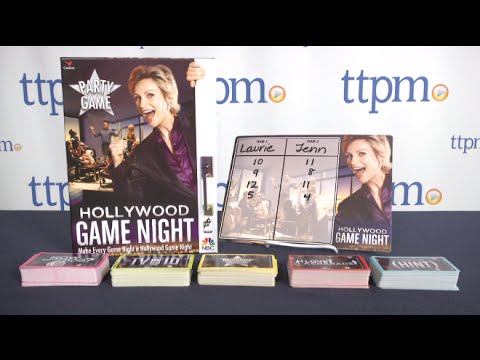 Hollywood Game Night is a party game based on the NBC game show Hollywood Game Night where players play some of the show’s popular games, including Take the Hint, TV ID, How Do You Doo?, I Love a Charade, and Celebrity Name Game. For full review and shopping info ►

Product Info:
Hollywood Game Night is a party game based on the NBC game show Hollywood Game Night. You don’t get to play alongside celebrities in this version like on the show, but you do get to play some of the show’s popular games, including Take the Hint, TV ID, How Do You Doo?, I Love a Charade, and Celebrity Name Game. The game is for four to eight players divided as evenly as possible into two teams. The team that wins a coin toss gets to choose the first game and play first. Then the second team will play that game. Teams will then alternate choosing and playing first until each of the four main games have been played.

Most of the games have a 90-second time limit, so when the sand in the timer runs out, so does your turn. Take the Hint is a guessing game where players on the same team provide one-word clues to their team’s guesser to try to get him to identify the correct answer. In How Do You Doo?, players must sing the song on the card using only the word “doo” and hopefully get their teammates to guess the correct song. TV ID is played by both teams at the same time. One player from each team bids the fewest clue words possible for the right to get their teammates to guess the name of a TV show. And in I Love a Charade, one player acts out an item on a card and tries to get his teammates to guess what he’s acting out. In the first two games played, each team earns one point for each correct answer. In the last two games played, each team earns two points for each correct answer.

After four games, teams take turns playing Celebrity Name Game, with one player acting as the clue-giver. In 90 seconds, he must get his team to identify as many celebrities as possible using clues, impressions, gestures, songs, and any and all facts he knows about that celebrity. For each correct answer, the team wins five points. That score gets added to the score from the first four games, and the team with the most points wins.